QC was a major participant in one of the largest environmental projects undertaken by the Canadian government – the remediation of the Distant Early Warning (DEW) Line sites.

For these projects, QC employed a project model that has had lasting impacts and achieved recognition for excellence. An Inuit capacity building and skills development model was employed to promote Inuit participation in the projects. This model resulted in consistently achieving higher Inuit employment rates than QC proposed in the project tender bids. Many of the projects had more than 95 percent Inuit on the projects’ payroll.

In 2006, Harry Flaherty, the then Project Director for many of the contracts, was awarded the Deputy Minister’s Pride and Recognition Award for Service Excellence from Indian and Northern Affaires Canada in recognition of the efforts to maximize and promote Inuit participation and career development.

During these clean-up projects, QC also found opportunities to give back to the nearby communities. In 2010, QC constructed a bridge for Clyde River and conducted several training programs to build a local skilled workforce for future work. 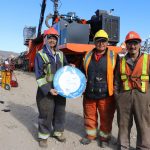